When the sun rises on the Connecticut River in the summer and fall months, oftentimes the day’s new light reveals rowers in sculls, skimming along the river, stroking in unison.

Chances are the men and women are from Northampton Community Rowing, a local nonprofit for experts and novices alike that we helped to support for the first time this year through our Customers’ Choice Community Grant program.

Leaders from the organization attended our March 21 awards event, accepting a check for $1,100 and toasting with us as we reached the $1.05 million mark in giving over nearly two decades.

We are proud of Northampton Community Rowing. It’s entering its 20th year and going strong—as evidenced by the fact that our customers voted for it to receive a share of the community grants.
“We’re overwhelmed,” says Reba Knickerbocker, the organization’s executive director. “We are really honored and grateful—just incredibly blessed to have this opportunity and to be seen as a community organization that bank customers want to support.”

Despite its name, Northampton Community Rowing is a regional rowing club with program offerings for all ages and ability levels all year round. It started as the Northampton High School crew team, formed by student Kelly Bidwell, the daughter of Northampton City Councilor Dennis Bidwell.

From a very small team of under 10 students, it has now grown to include roughly 70 adult and junior rowers from Northampton, Easthampton, Southampton, and Amherst, in recreational as well as competitive rowing programs.

“The wonderful thing about learning to row is that you can start from wherever you are,” Reba says. “There are no prerequisites, no age limits, no restrictions. Anyone can experience the beauty of rowing at any point in their lives.”

Northampton Community Rowing has diverse programs available for people of varying degrees of rowing mastery throughout the summer and fall, divided between intermediate and advanced programs. Take part in sweep rowing—rowing with a single oar per person—or sculling—rowing with two oars per person.

Reba says the grant money will likely be used to enhance the programs and opportunities the organization has for youth and masters rowers. “We also offer financial aid to children on reduced or free lunch program; we may use the grant to fund some of that aid,” she said.

We are proud to support organizations like Northampton Community Rowing across Western Massachusetts. This year, through the Customers’ Choice Community Grants program, we presented $100,000 in awards ranging from $500 to $5,000 to 57 community nonprofits.
As he raised a glass to lead all recipients in a toast, our President and CEO John F. Heaps Jr. said, “We started 16 years ago with an idea to ask our customers to vote for a worthy organization to receive funds. Here’s to the $1 million mark. And here’s to you, for making our communities special with your contributions every day.” 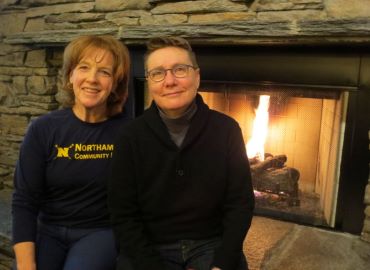 “We’re overwhelmed,” says Reba Knickerbocker, the organization’s executive director. “We are really honored and grateful—just incredibly blessed to have this opportunity and to be seen as a community organization that bank customers want to support.”