From The Ground Up Salmon Studios

At Florence Bank, we believe all of our customers have a story to tell, especially those who have built their businesses from the ground up. We have the resources and tools to nourish your humble beginnings, execute your plans, and support you as you grow. So go ahead and continue to dare to dream, and we’ll focus on bringing your vision to life.
Sam Ostroff founded Salmon Studios and is both a leader and a laborer there, but he’ll tell you his most critical role in the organization is serving as head of crisis management. That’s because everything the Florence metalwork company creates has never been made before—by anyone—and often, the ingenuity creates quandaries.

“I talk to my dad almost every day,” Sam says of his engineer father, who is also his inspiration and mentor. “We talk about problems that come up in what we’re building. We’re always figuring something out for the first time.”

Examples of the company’s eclectic and dynamic work range from bronze-cast window and door trim for an 8,000-square-foot apartment in New York City, to a 25-foot-tall metal sculpture at the Hotel Marlowe in Boston, to a steampunk-inspired truck the firm made for Hendrick’s Gin.
Fully engineered by Salmon Studios, the 38-foot-long, whimsical Hendrick’s vehicle relies upon an elaborate system of pneumatic tubing, interlocking gears, and rotating blades and slices up to 18 cucumbers per hour “in the most complex way you could imagine,” Sam says.
Locally, iconic pieces from Salmon Studios include the Mo Willems elephant sculpture at the Eric Carle Museum of Picture Book Art.
Sam says the diversity in his firm’s products and services is what has helped his company to thrive. He also believes that being bold and taking risks has paid off for him.

He bought a house in Florence at 23 years old. Likewise, with guidance and encouragement from his commercial lender at Florence Bank, Sam created a plan to purchase the 17,000-square-foot, historic mill building that Salmon Studios occupies.

This building, with its 25-foot ceilings, has been a critical asset in working with projects on a large scale. The cost—at $675,000—was staggering to Sam back in September 2014. He didn’t let it stop him, though. He met with his Florence Bank lender and created a manageable financing plan.
He expects he will repay the loan by 2024. “Every step of the way, I’ve taken the biggest bite I can take,” Sam says, encouraging new entrepreneurs to “take big leaps and big bites.”

Sam grew up in Philadelphia, watching his father build things in his machine shop, and Sam’s been dreaming up ideas and building sculptures for as long as he can remember. The designs live in his imagination, and many have been occupying space there since Sam was in high school.
After a year spent studying film and psychology at Hampshire College, Sam opened a small metal shop in Easthampton and made tables, lamps, and other sculptural pieces. He sold his wares at craft shows with limited success and got his boost when he connected with the founders of the Paradise City Arts Festival, Geoff and Linda Post.

“They believed in me and wanted to help me,” Sam says, noting the Posts gave Sam a $12,000 fellowship award that allowed him to focus on his art for one year without also holding a traditional job. Around the new millennium, Sam sold a chess table and chairs for $6,000 at a show in Marlborough. “That was a turning point,” he says. “I thought, ‘This could work.’”

In 2004, Sam opened a shop in the Arts and Industry Building in Florence, where he stayed for 12 years and “grew into a company.” He founded Salmon Studios—named after the fish and not a version of his name—in 2010. His early focus was on sign-making; well-known signage for Eastworks and the Hotel Northampton were made by Sam’s team, which has grown from a total of three in its early years to 13 and still growing now.

“To employ people and work with them, you have to be a good people-person,” he says, noting that leading a team is among his biggest challenges. He has learned from various business mentors how to be patient, to empower and motivate others, and “keep it all going.”
Sam is proud that his company brings a lot of money from Boston and New York City into this region. And he enjoys when he is able to redevelop and reinvent something he built “crudely” in high school with the tools and skills available at the time in the more refined way he has mastered now.

Sam’s advice to others is, “Take a passion, and build a business out of it. Just go do it. Whatever your idea is. Don’t get too bogged down. Try to make it happen.”

Behind every successful business is an interesting story. To share yours, reach out to marketing@florencebank.com. Florence Bank has the business solutions you need to help turn your dreams into reality. Call our business experts today to get started.
Learn more about Salmon Studios 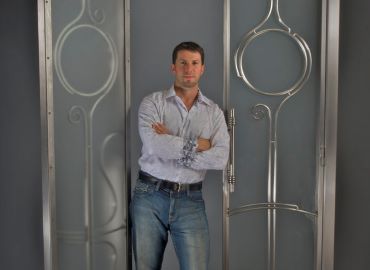 “I talk to my dad almost every day,” Sam says of his engineer father, who is also his inspiration and mentor. “We talk about problems that come up in what we’re building. We’re always figuring something out for the first time.”