From The Ground Up Local Burger

At Florence Bank, we believe all of our customers have a story to tell, especially those who have built their businesses from the ground up. We have the resources and tools to nourish your humble beginnings, execute your plans, and support you as you grow. So go ahead and continue to dare to dream, and we’ll focus on bringing your vision to life.

Jeff Igneri of Florence knows it’s important to keep up with the trends in the restaurant industry. That’s how he’s made Local Burger of Northampton, Massachusetts, a local success.

Local Burger’s name and its leading premise enforces that food should be locally sourced whenever possible. That was an idea that was ahead of its time back in December 2008, when Jeff opened the restaurant with his father, Joseph “Joey” Igneri, and his brothers, Chris and Steve.

“We were one of the first ones in the area to start the ‘buy local’ movement,” Jeff, 47, recalls.
"When we first came here, we went to local farmers and asked for beef, but they weren't producing much." Back then, Chicoine Farm in Easthampton was able to provide Local Burger with 50 pounds of grass-fed beef per week; it now supplies the restaurant with 300 pounds per week. Because the demand can be greater, Jeff also orders meat from Chickering Farm in Vermont and a farm in the Midwest that produces Angus beef.

Other menu items sourced locally include French fries made from Szawlowski potatoes in Hatfield; ice cream from Maple Valley Creamery in Hadley; and produce from Mountain View Farm in Easthampton. Jeff has a rich culinary background with a bachelor’s degree in hotel restaurant management and a master’s in hospitality administration, both from Johnson & Wales University. He previously ran country clubs and nightclubs and a small restaurant-hotel in Shelter Island, N.Y., and he opened The Westin in Providence, R.I.

Then, Jeff, his father and brothers started thinking about opening their own place. Burger restaurants were becoming popular, so they had the idea and just needed a location; Jeff says the family members were looking for real estate in Worcester and Providence, R.I., until Jeff’s then-girlfriend, April—now his wife and mother of their two young children—came to Smith College.

While walking around downtown Northampton during a visit to campus, Jeff and Chris happened upon the vacant storefront at 16 Main St. and had the chance to talk to the landlord. The Igneri family jumped on the opportunity to use the space, but there was much work to do before they could even open.

“The physical area was a disaster,” Jeff remembers, noting he and a friend did extensive renovations. In total, Jeff and his father invested $65,000, but they paid themselves back in the first year. This was a relief, given Jeff said a string of failed restaurants at the location had preceded them. “People were coming by and saying, ‘This spot is cursed,’” he says. “It was depressing to see all of the business names crossed out on the fuse box.”

One friendly face that stuck out in the crowd of naysayers was former Florence Bank Branch Manager Sandy Smith. Sandy had seen businesses in that location come and go for the past decade. Nonetheless, she made the effort to stop in and welcome Jeff to the neighborhood. This simple gesture of kindness is why Jeff decided to become a Florence Bank customer.

Today, Local Burger has such momentum it’s expanded threefold. Steve operates a Local Burger in Keene, New Hampshire, and the Igneri family operates Local Burgy in Williamsburg, and soon they will manage a mobile food truck that offers barbeque fare.

Jeff says commitment is what keeps Local Burger going strong. He and his family members and a core team of long-time employees—with a team of 17 staff members—are dedicated and always on site. “Our people care so much about this place,” he says. “It’s so important to be able to trust your employees.”

Innovation is also a key element to keeping Local Burger successful. Jeff’s idea to use Captain Crunch as a coating for the chicken tenders was a big win, making the menu item a popular one. More recently, purchasing an infuser and offering flavored vodkas at the bar—such as jelly bean vodka this Easter season—has helped keep the restaurant top of mind for patrons.

“If we see something different out there, we’ll try it,” Jeff says, noting that as seasons change and new produce becomes available, special burger options present themselves on the menu. The most popular of the staples served week to week is The Westhampton, which Jeff says has cheddar cheese and bacon on it and is served with ranch and barbeque sauces.

Jeff recommends that entrepreneurs starting out take advantage of the resources available in the region and reach out to other business owners for advice. He also suggests perseverance.
“Stick to your goals and what you believe in,” he says. “Put everything you have into what you want, and you’ll succeed. I was in that spot where I was ready to give up, and I’m so glad I pushed forward.”

Behind every successful business is an interesting story. To share yours, reach out to marketing@florencebank.com. Florence Bank has the business solutions you need to help turn your dreams into reality. Call our business experts today to get started.
See everything Local Burger has to offer 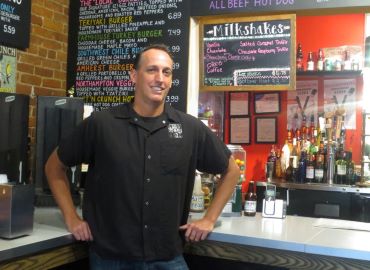 “Stick to your goals and what you believe in,” he says. “Put everything you have into what you want, and you’ll succeed. I was in that spot where I was ready to give up, and I’m so glad I pushed forward.”