From The Ground Up Crimson & Clover

At Florence Bank, we believe all of our customers have a story to tell, especially those who have built their businesses from the ground up. We have the resources and tools to nourish your humble beginnings, execute your plans, and support you as you grow. So go ahead and continue to dare to dream, and we’ll focus on bringing your vision to life.
At Crimson & Clover farm, co-owner Nate Frigard is focused as much on growing relationships with customers as he is on growing lettuce, strawberries, and herbs.

Nate’s vast experience and passion for working the land make him a good farmer. Eager listening, and the kind of hands-on education he offers to members about their food, makes him a good businessman. Together, the combination of skills has made Crimson & Clover blossom from an idea into a center for organic farming that brings community together in many ways.

“Since we started, I’ve seen the importance of people feeling connected to the land and the source of their food,” Nate says. “So many people have told me how disconnected from food they’ve felt, and I think that direct connection on a local farm is something that’s nearly impossible to replicate on a larger scale.”
Before Nate and farm co-owner Jen Smith began operating the farm in 2011, a small controversy surrounded the property, which was 40 acres back then.

On the market, the land was slated to become a ball field until a grass-roots group of local residents formed and created Grow Food Northampton, which raised $700,000 in seven months. The new nonprofit purchased the land, saving it for farming while also expanding the total lot size to 120 acres. Grow Food Northampton then sought farmers with an interest in organic farming and community-building. Nate and Jen’s vision was a perfect fit, and they had experience working at a variety of farms across the country and had attended the Center for Agroecology & Sustainable Food Systems in Santa Cruz, California.

Nate says Florence Bank played a pivotal role in ensuring growth for Crimson & Clover by providing its first capital loan of $60,000 in 2011 and offering a line of credit that helps the farm smooth out the ups and downs the growing season places on cash flow.

“A lot of other banks wouldn’t have worked with us,” Nate says. “We didn’t have the financial track record of owning a business. The success of our business today is because of the supportive atmosphere of the community.”

The business has grown rapidly as community interest in locally-produced food has become tremendously popular. In the farm’s first year, Nate said 215 farm shares were purchased. That number grew to 350 last year, when a program for farm share memberships in eastern Massachusetts was put in place, securing 50 new additional Boston-based memberships.

Today, Crimson & Clover grows everything from strawberries to potatoes, including flowers, herbs, peas, beans, salad greens, lettuce, and kale. When picking up their shares, members can pick produce themselves, and they can also make purchases in the farm store, which offers meat, produce, cheese, and other products made by other local farmers.

He adds, “I’m in the field, harvesting and weeding less and less, but I’m working with the people who are. I understand that they are part of our greater community-building effort that’s happening on the farm.”

Though the Florence business is primarily supported by farm shares and sales at the on-site farm store, the business recently received a boost from the Harold Grinspoon Charitable Foundation.
Crimson & Clover is one of 59 farms funded this year by the foundation in partnership with Big Y through the Local Farmer Awards. Florence Bank is part of a team of funders that supports this work, in addition to these other corporate sponsors: Hood, Friendly’s, PeoplesBank, Sheraton Springfield Monarch Place, Ann and Steve Davis, Baystate Health and Farm Credit East.

Launched in 2015, the Local Farmer Awards program has grown substantially, thanks to its sponsors; through it, awards increased by 78 percent in 2018 over the inaugural year.

Nate says the $2,500 grant that Crimson & Clover received this year will allow the farm to purchase a vegetable washing machine, helping him to further improve the customer experience—as well as the farm’s efficiency.

Nate offers a modest equation to those considering an entrepreneurial move: “estimate your projected income—and then cut it in half.” Likewise, they should estimate costs—and then double them. “We were able to put all of that pessimism into practice, and it has stopped us from losing a lot of money,” he says, proving that his business model, much like the food he grows, is fresh and uncomplicated.

Behind every successful business is an interesting story. To share yours, reach out to marketing@florencebank.com. Florence Bank has the business solutions you need to help turn your dreams into reality. Call our business experts today to get started.

More information on Crimson & Clover or to purchase a farm share. 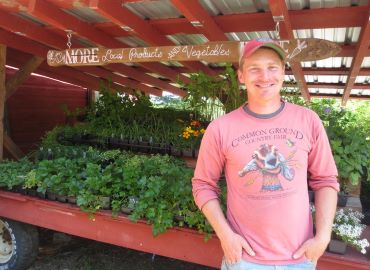 “Since we started, I’ve seen the importance of people feeling connected to the land and the source of their food,” Nate says. “So many people have told me how disconnected from food they’ve felt, and I think that direct connection on a local farm is something that’s nearly impossible to replicate on a larger scale.”