From The Ground Up: Camp Howe

At Florence Bank, we believe all of our customers have a story to tell, especially those who have built their businesses from the ground up. We have the resources and tools to nourish your humble beginnings, execute your plans, and support you as you grow. So go ahead and continue to dare to dream, and we’ll focus on bringing your vision to life.
At the end of every one- or two-week session at Camp Howe, there are always a handful of young people who head home with something they’ve never had before: A recognition award.
The acknowledgement campers receive is earned not for excelling in athletics or academics but for being the kindest, having the biggest heart, or for building community.
“We create a space where children can learn to accept themselves as well as others around them and to be happy with who they are and the way they are,” says Terrie Campbell, executive director of the camp that’s been nestled on the shores of Lower Highland Lake in Goshen for roughly 80 years.
Terrie says when children leave Camp Howe, they are always more confident and grounded.
That’s because Camp Howe isn’t just about fun; it offers programming that’s inclusive of all children—no matter their age, ability, race, disability, gender, or sexual orientation. Camp Howe builds community and acceptance through the value it places on clear thinking, loyalty, service, and health.
Camp Howe is one of the first camps in the United States to be accredited as a national inclusive recreational program by the National Inclusion Project. While its programming was broad when Terrie arrived 17 years ago, inclusivity was Terrie’s vision—before “inclusivity” was a buzzword.
This summer, Terrie said 956 campers attended one of seven sessions, led by 50 staff members. Campers and counselors alike come from all over the region, and 11 countries across the world, including the UK, Austria, Sweden, Poland, Australia, and Turkey.

Each camp year begins with two and a half weeks of staff training. Terrie says when hiring, she isn’t focused on finding leaders with skills or certifications as much as those who understand the camp’s mission and beliefs. “You can’t teach that,” she explains.
Camp Howe offers programming from swimming, kayaking, and paddle boarding to ropes courses and learning to care for animals. “These are the tools that help us achieve community,” she says. “It comes from a basic message that no one is the best at everything.”
Young people learn that if they can’t hit the bullseye in archery, no one will mock them; likewise, in taking part in the activity they excel at, they won’t belittle others. “We create an environment where you accept everyone’s achievements,” Terrie said. “It’s about breaking your own records here rather than being compared to others.”
The concepts that campers learn range from exploring countries and cultures to understanding technology. This summer, a Smith College student built a creative program through which she used beads to help campers understand binary numbers; the children made bracelets that spelled out their names in binary code. This young woman also taught campers about hydroponics.
“She went way into depth about Ph levels, and she still captured 6- to 16-year-olds with what she was saying,” Terrie says, noting that the lesson was woven so seamlessly into the activities that the young people didn’t even recognize they were learning.
“Staff members blossom here, too,” she added, noting that the counselor from Smith won a staff award for her lesson.

Terrie holds a bachelor’s in psychology from the University of Wollongong in Australia. After graduation, she counseled adolescents in a group home in a nature-based program and then travelled for a time, working at various camps. She landed at Becket Chimney Corners, a YMCA camp in Becket and later found Camp Howe.
“There’s something special about Camp Howe that keeps me here,” she says.
Terrie is at Camp Howe all summer. In the fall, when the staff leaves, and she has buttoned down the campus, she heads home to Westfield. She has a few weeks for deep breathing, then she begins planning the next year’s season.

In addition to thinking about children, their needs, and their growth, Terrie and her board members have to keep their minds on maintaining the property.
Challenges include keeping the camp affordable as costs continue to rise. General operations are funded through tuitions, rebates, rental of the property, and some funds are reinvested via capital projects, such as refurbishing the basketball courts or replacing hot water tanks that feed the cabins.
There are fundraising efforts for the nonprofit, and community partners help quite a bit as well. Florence Bank, for instance, helped support the construction of a new multi-purpose hall.
“Our accounts are with Florence,” Terrie adds. “Florence Bank has also fiscally supported local youth attending camp by providing camperships.”
Terrie has built great relationships with Florence Bank staff in Williamsburg, and she appreciates how bank staff help her new staff members each year. “They come from all around the world, and Florence Bank helps them open bank accounts so they can cash their checks,” Terrie says. “The bank has been very accommodating to our unique needs.”
Behind every successful business is an interesting story. To share yours, reach out to marketing@florencebank.com. Florence Bank has the business solutions you need to help turn your dreams into reality. Call our business experts today to get started. 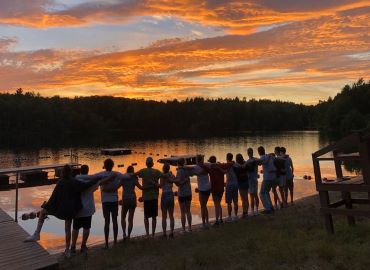 “We create a space where children can learn to accept themselves as well as others around them and to be happy with who they are and the way they are,” says Terrie Campbell, executive director of the camp that’s been nestled on the shores of Lower Highland Lake in Goshen for roughly 80 years.